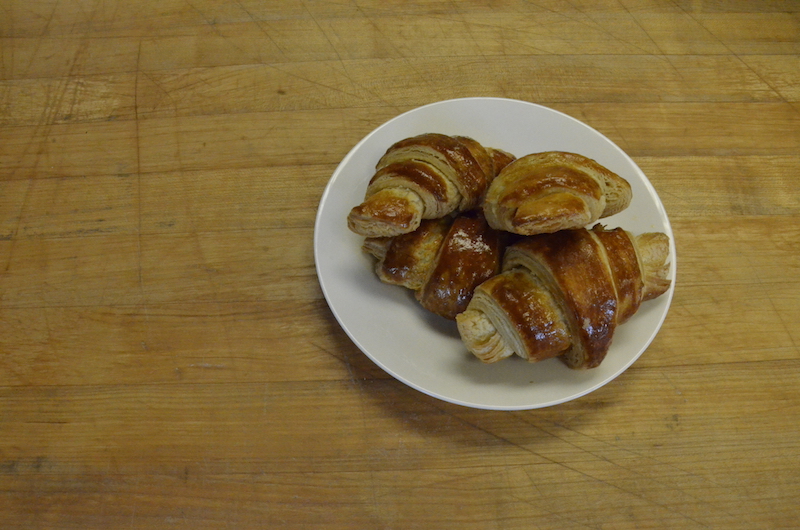 Traditional croissants are delicate and airy pastries, made through “laminating”- a process where cold butter is wrapped with yeasted dough, kept cool and folded repeatedly to create multiple layers.

The process in itself is laborious (but worth it), and croissants have many steps and variables to consider like temperature of the butter, resting the dough and monitoring the oven settings — At the end of all of this, though, the result is buttery deliciousness.

When making gluten-free croissants, the same ingredients, save for the gluten-free flour are used, which ought to produce the same outcome, right?

“Because of the removal of gluten, the pastry will not oven spring the way traditional croissants do,” said Ally Zeitz, manager of Drexel University’s Food Lab in the Center for Food and Hospitality Management. “Meaning the issue with making gluten-free croissants mimic their traditional counterpart is mostly mechanical.”

Zeitz was first contacted by Lila Colello from Flakely Bakery in fall of 2016 who was hoping to work with the Food Lab to build a better gluten-free croissant.

She explained that the initial croissants were flat and did not appear to have the layers that represent a traditional croissant — they looked like a rolled piece of pie crust. Also, Lila was not happy with their flavor, stating that it was “ricey.” After making a few ingredient swaps and conducting numerous trial runs, the best gluten-free croissant was born — by mistake.

“When bread and pastries are put into the oven, the heat causes a reaction and the product expands. Croissants rely on oven spring to expand and become light and flakey. The high temperature causes the butter to melt, and the gluten to expand its web to create that nice honeycomb texture in the middle,” says Zeitz. “Because there is no gluten in gluten-free pastries and baked goods, they either explode under the pressure of oven spring or melt.”

While Zeitz was juggling a handful of tasks in the kitchen, she popped her batch into an oven with a temperature so low, it was basically on the dehydrate mode. It wasn’t until later that she realized she needed to turn the oven up to a higher temperature.  And when she removed them from the oven, an expectant disaster turned out to be the most flakey croissant she had baked to date.

Making the best gluten-free croissant didn’t come from the perfect measure of the perfect ingredients – it came from controlling the oven spring so the croissants rose just enough to mimic their traditional gluten-filled counterpart.

“The best thing about this croissant recipe is that it uses the same ingredients as traditional croissants, besides the gluten-free flour,” said Zeitz.

The patent is on the baking process which transforms your traditional croissant ingredients: European butter, milk, yeast, sugar, salt, and the gluten-free flour.

“The patented process has consistently turned out the best, browned, buttery gluten-free croissant in Philadelphia, and quite possibly the U.S.” Zeitz proclaimed.