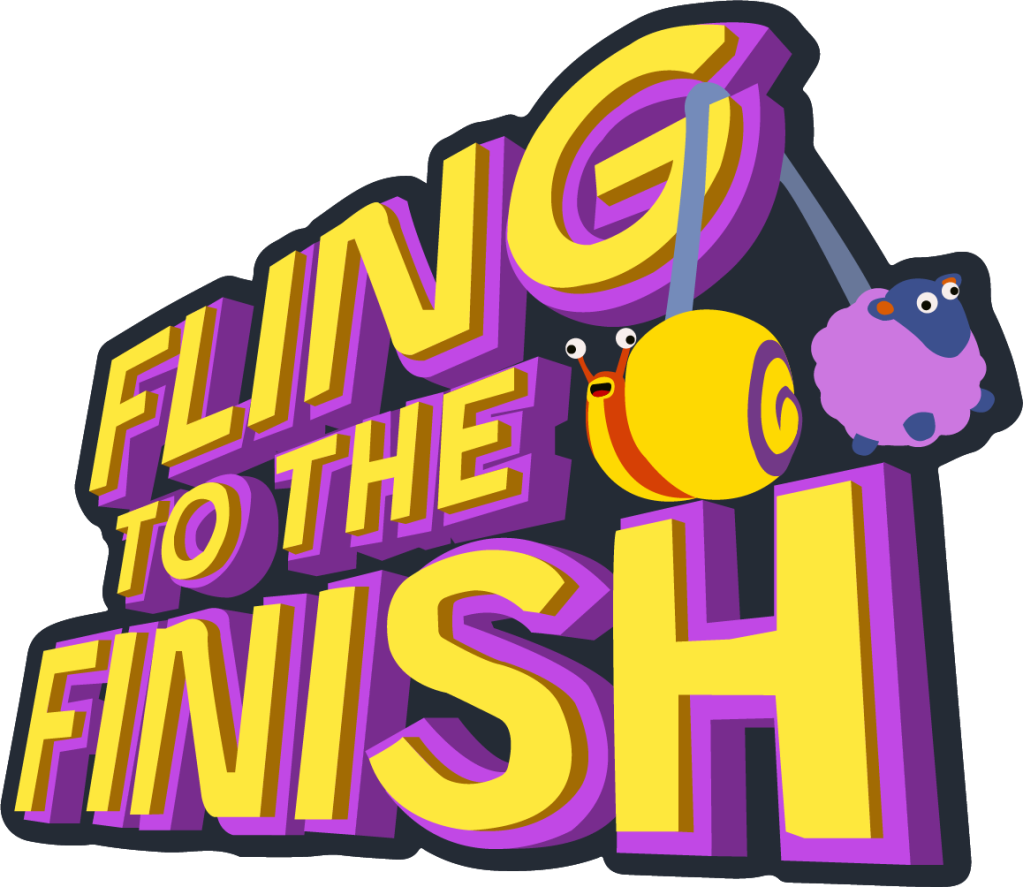 The latest student-designed video game out of Drexel’s Entrepreneurial Game Studio is encouraging players to get close — really close — while racing through an obstacle course virtually and physically linked to their teammate.

In a creative twist on multiplayer gaming, teams share a single controller while navigating the game as a pair of cuddly, round animals tethered to each other with an elastic band. “Fling to the Finish” is an oddity, even within EGS’s stable of inventive student work, that could inspire a new take on interactivity in video games.

At first glance, the game looks a lot like “Mario Kart,” or other popular split-screen, head-to-head racing games. But this one gathers four players around two controllers. Each player controls one of the racing animals that is tethered to another, controlled by their teammate.

The eccentric control scheme has the effect of immediately establishing — if tenuous — a team camaraderie, and sets the stage for a virtual symbiosis. The team must coordinate its movements to successfully roll, bounce, twist, jump and (of course) fling its way to the finish line.

“Unique is not a term that applies to most video games nowadays, but I haven’t found another game that is quite like it,” said Tony A. Rowe, an assistant professor in Westphal College, who spent two decades in the game development industry working on the “Call of Duty” and “Star Wars” series, among others. As a mentor for the students working on Fling, Rowe has seen its evolution and describes it as “something like ‘Super Monkey Ball’ combined with yo-yos on rubber bands.”

The idea of having two players share one game controller — using the joystick and shoulder buttons on each side of a standard controller used for most console games — was initially more of a design coincidence than a stroke of creativity.

“Honestly, I think sharing the controller was the least-planned part of the design,” said Ryan McMahon, an undergraduate in Westphal College, who is one of the student designers. “When we made a minimal prototype in the first week we treated each team as a single player. It was just quicker to program it this way.”

“I loved how the players sharing a controller mirrored the tethering of their characters on screen. It is perfect for playing on the couch with friends and better yet, you don’t have to buy four controllers to play,” Rowe said.

“We were originally worried that it may be too uncomfortable for most people, but now we think it’s a far better way to play,” McMahon said. “Physically sharing a controller puts the players in a ‘we’re in this together’ mindset from the very start, which increases communication and, overall, it creates a more memorable experience.”

There haven’t been many games that require players to share a controller; “Brothers – A Tale of Two Sons” and “Mario Party” are the two prominent examples, designer Andre Edgarian suggests, but neither requires the level of coordination and communication that “Fling” does of its teammates.

Obstacles range from a maze of poles — tangle hazards for the entwined teams — to hurdles that require a well-timed cling-and-flick trick, to dangling logs that take simultaneous spinning to traverse. “Oddly, a lot of our ideas came from reality game shows like ‘Wipeout,’ ‘Survivor’ and ‘Ninja Warrior,’” McMahon said. “’Wipeout’ is all about getting through ridiculous obstacle courses and enjoying countless falls and fails the contestants endure. ‘Survivor’ does a lot of interesting things from a social game-design perspective, often focusing on gameplay through relationships. And to add an extra dynamic to their obstacle courses, they often link contestants to the same rope before sending them through.”

The students’ design decisions strive to keep some of this entertaining absurdity in their game, from the comical background music to the cute animal characters and their interaction with the obstacles themselves. Their light-hearted approach, which pervades throughout the game, was even evident as they presented it to a rapt crowd of game designers at the College Game Showcase.

With their success at the University Games Showcase, the group is pushing to release a final version of the game by the end of summer on Nintendo Switch and Xbox — a challenging target for a student design company.

“We want to design a lot more obstacle types that will keep our 20-plus levels feeling fresh, while also creating new art for the unique worlds that make the levels feel cohesive,” Edgarian said. “While we feel that the amount that players communicate in their own team is in a good place, we want to improve interaction with the opposing team. For that we’re implementing pickups that the teams can use against each other. We are also planning to add more loveable characters so that players have options and the goal of unlocking more of them.”

To make all this happen, McMahon, Edgarian and their partners in the student startup SplitSide Games, Ben Spurr and Utkarsh Dwivedi, are working with guidance from Rowe and other design professionals in the Entrepreneurial Game Studio.

SplitSide’s success is the latest in a list of accolades for game design projects out of EGS and Westphal’s Game Design & Production program, including a student startup called 51st and Fire, which also earned laurels at the Intel University Game Showcase in 2016 for its game “Mirrors of Grimaldi.”

“I’m deeply proud that SplitSide games has continued Drexel’s tradition of excellence in game design with this honor from Intel,” said Frank Lee, PhD, a professor in Westphal College and director of the Entrepreneurial Game Studio. “The students, their advisors and mentors in the Digital Media program and in the EGS, should all be proud to see their work recognized in a highly selective competition like this. It speaks to the quality of work and the work ethic of everyone who is part of this program.”