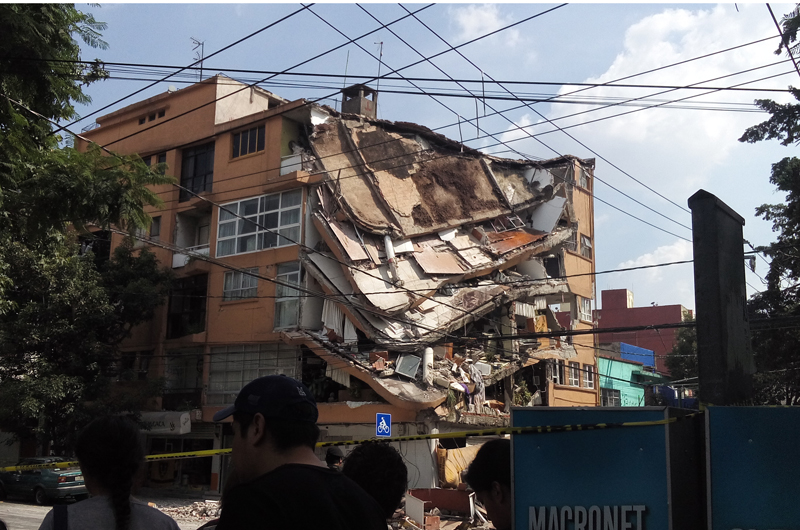 Can one earthquake beget another?

In just 11 days, two severe earthquakes have struck Mexico. The first occurred off the country’s coast near the state of Chiapas Sept. 8, registering at a magnitude 8.1. The next was centered near Mexico City and hit 7.1 Sept. 19.

Both have been deadly and caused widespread damage. But since they occurred so close together, are they related?

Amanda Lough, PhD, assistant professor in the College of Arts and Sciences, is a geologist who focuses on seismology, the study of earthquakes. She explained that although there are some rare cases where one earthquake might lead to another, that is almost certainly not the case in Mexico.

This is a subduction zone. That’s where one plate meets another and goes underneath it.

In the case of oceanic plates, they will always subduct beneath continental because the oceanic crust is denser than the continental crust. When this happens, we get volcanic chains — think the Aleutians up in Alaska, the Cascades, and all down the western side of South America — and major earthquakes. One piece is literally being shoved beneath another so the forces are huge and it makes sense that that would generate ruptures and, therefore, earthquakes.

Now, Mexico is a bit more complex because there are actually three plates involved. The first event was near the coast and does follow the simpler case of just two-plate subduction, but the event yesterday does not.

Is it common to have two large events like this so close together?

It is also possible that the first quake altered the stress sate by relieving stress in one area and transferred it to another. There was an example in Turkey where researchers were able to predict what part of the fault would fail next by analyzing the alternations in the stress field after one failure (earthquake).

In this case, I wouldn’t say we’re talking about either of these possibilities. I would say, without having done any research in the area, that this is a coincidence and Mexico is a highly seismically active area.

So you don’t think they’re related?

The larger event on Sept. 8 was subduction related — it’s right at the trench between plates — and the one near Mexico City was a bit more complex. There are three plates there, so it isn’t a simple case of one going beneath the other.

My opinion would be that the events aren’t directly related in large part due to the distance between them. This is a highly active area so it’s not out of the realm of possibility to have two large events close in time.

Should people in Mexico brace for another major earthquake anytime soon?

Mexico City has a history of seismicity. Being so close to a subduction zone, there is always the possibility of another quake. And for central Mexico, add in the complexities of the three plates.

Each fault zone is unique and it is impossible to truly predict when the next quake will come. The best we can do is give probabilities.

Subduction zones tend to follow what is known as seismic gaps, meaning the different parts of the fault zone will take turns. So, following that theory, another quake in the near future is most likely of a low probability.

But the Earth is extremely complex and not all fault zones behave nicely. And, again, in the case of Mexico, we’re talking about three plates, not the basic case of two.