One of the hard parts about inventing a brand new instrument is describing what sound it makes.

“It’s hard to place,” said Peter English, Drexel’s ExCITe Center Knight Foundation artist-in-residence, who along with doctoral researcher Jeff Gregorio, turned drums and magnets into an instrument that has a sound all its own.

This week a handful of musicians, including English and Gregorio, will experience something that most artists haven’t encountered since their formative years: the chance to create music from the new sounds of something they turned into an instrument.

The duo hatched their idea in December. After considering a number of experimental music approaches, they settled on the idea of using a drum — perhaps the obvious choice for a pair of percussionists — as the interface for a whole new type of instrument.

Gregorio, who had a hand in the evolution of Drexel’s magnetic resonator piano, brought in the idea of using magnetic fields to turn drums into instruments with a whole bag of musical tricks.

The instrument works by placing an electromagnet over the top of a drum head. Gregorio then placed a disc of steel foil on the drum head, which the magnet vibrates. It makes the drum head vibrate, which resonates the whole chamber, without ever having to touch it. Sending specific electric pulses through the magnet changes the pitch, essentially making it a hybrid synthesizer.

They produced a prototype this spring that showcases the otherworldly sounds it can create.

English and Gregorio also rigged up a way to the metallic rim of the drum into a theremin – the instrument that makes this spooky sound in scary movies — so you can produce wild sounds just by moving your hand near the rim.

The final twist increased the scale dramatically — to a circle of 16 drums they call Drumhenge. They then connected all the drums via wireless controllers, so that it became a giant network. Their vision for a performance at Drexel’s Black Box Theater has a group of musicians playing the instrument together, with each person controlling different aspects of sound production. Think of it like playing a giant trombone that requires five people to play — one to each valve, one on the slide and one blowing into the mouthpiece. 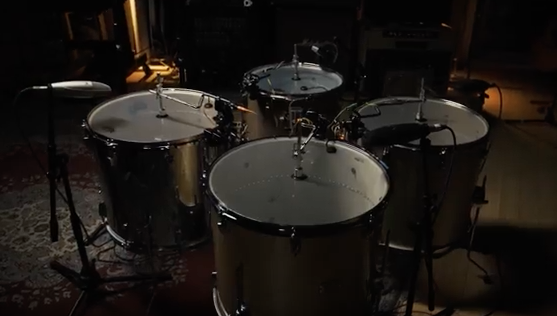 “We wanted to make an instrument that needed to be played together,” English said. “Music is a language, a deeply primal, intuitive one. And collaborating is a big part of how you speak it. There are a lot of bands that just play their instruments, and aren’t really listening to each other. This instrument requires that you tune in and really start speaking the language.”

Gregorio and English will bring saxophone, traditional percussion, and keys into the mix for a truly unique jam session that will culminate in a performance at 8 p.m. on Saturday, June 17.

Well, they’re inviting you to be part of the musical collaboration. Before their performance on Saturday the group is inviting people on stage to test out Drumhenge, and make some new sounds of their own, during an open dress rehearsal from 3-5 p.m.