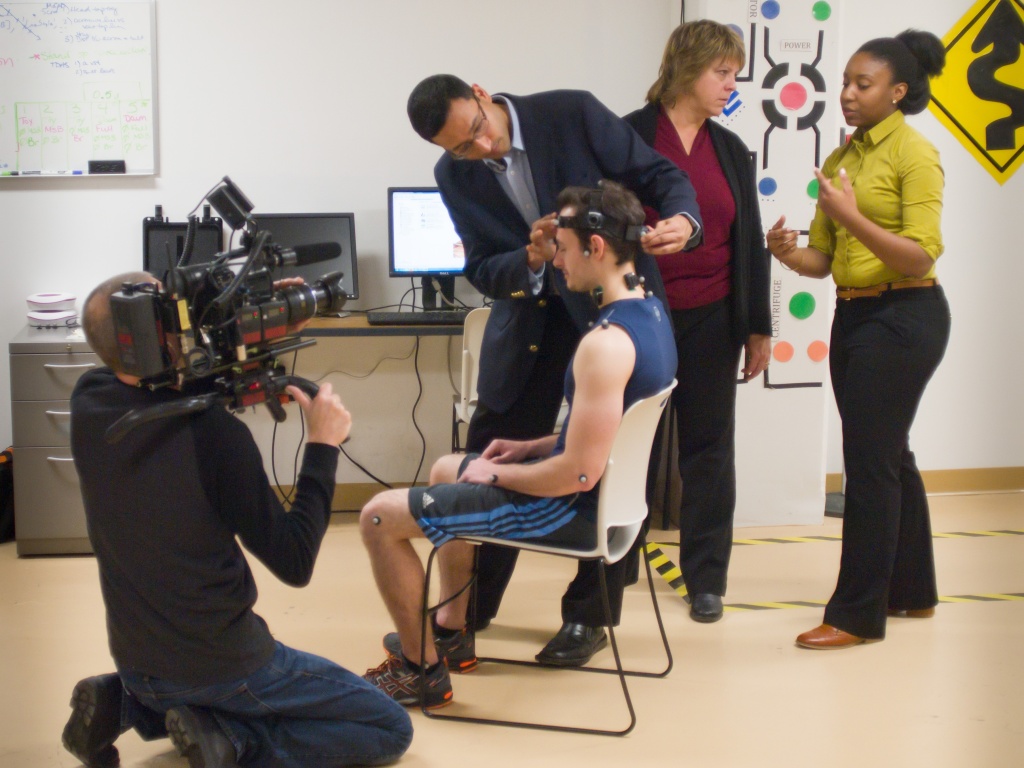 In one basement lab at Drexel University, undergraduate Evan Bisirri is instructed to strap in and hold on tight as he seats himself inside a crash-test simulator. A wild ride is about to begin.

But don’t worry — he won’t actually crash. Drexel University and the Children’s Hospital of Philadelphia (CHOP) researchers have designed the oscillating “sled” as a way to test pre-crash avoidance maneuvers — the microseconds before a car accident happens. What happens in those moments could mean the difference between injury or prevention.

The research was recently featured in an episode of the Discovery Channel’s “Daily Planet,” a science television program that airs in Canada.

“Most crash testing is done with a perfectly positioned occupant. But we know, prior to a crash, there is often some kind of avoidance maneuver — we swerve, we brake. And so we wanted to re-create that here in the lab,” says Kristy Arbogast, PhD, co-scientific director at CHOP’s Center for Injury Research and Prevention, during the episode.

To do that, Arbogast and Sriram Balasubramanian, PhD, associate professor at Drexel’s School of Biomedical Engineering, Science and Health Systems, teamed up to build the world’s first human volunteer oscillator sled. The researchers test its effects on a human passenger by attaching motion capture markers — the same kind used by video game designers — to a volunteer and analyzing how different parts of their body move over time.

The hope is to better understand how our muscles respond when a crash is coming, and how vehicles could be better designed to protect us, since most people don’t have enough time to brace themselves before an accident.

“I’m hoping we create data that will help design better restraint systems, better crash test dummies and better simulation models,” Balasubramanian told the Discovery Channel Canada. “I think this combination can lead to zero injuries and hopefully zero fatalities in the near future.”

Watch part of the episode below.