Drexel University’s Marco Airaudo, PhD, an associate professor of economics in the LeBow College of Business, shared his thoughts on the United Kingdom’s recent vote to exit the European Union. 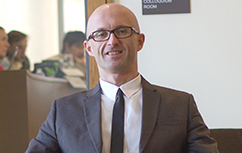 Did you expect the vote for Britain’s exit From the European Union?

As any economist, I could not foresee any advantage for the United Kingdom to leave the European Union. I was even surprised to see that various polls before the vote were predicting a very close win for remaining in the E.U. Once the predicted difference went down to 2-4 percent, I feared the exit, but was hoping for a close win.

What does the “Brexit” mean for the U.K.? What can we expect to see immediately and in the upcoming months?

Although there is lots of speculation in trading nowadays, the immediate reaction of the markets tells us what we should expect: a depreciated British Pound (signaling a lack of confidence in the future of the U.K.), and capital outflows from the U.K. to other markets. The London Stock Exchange lost only 3 percent the day after the vote in favor of a Brexit, but this is because of how that index is calculated which relies significantly on pharmaceutical, gold and other high performing commodities/markets. All other stock markets around Europe crashed: Milan and Madrid lost 12 percent, Paris and Frankfurt around 6 percent.

I foresee a significant short-term recession in the U.K., for several reasons.

First, it is unlikely that once out of the E.U., the U.K. will enjoy free trade in goods and services with the rest of Europe. The British will probably push for an international trade agreement similar to those currently in place with Norway and Switzerland. I think this will be very unlikely. Those two countries never wanted to be part of the E.U., which, had a strong interest in a commercial partnership given the strengths of these countries (oil in Norway, financial intermediation in Switzerland). I believe the E.U. will not grant too many trade advantages to the U.K. Otherwise, other current members would want to follow the same path.

Second, London, which was the financial heart of Europe, will probably go through a significant downsizing. Since the creation of the E.U., each country has somewhat specialized in a different area: Germany in manufacturing and cars, Italy and France in high-end luxury products and food, northern countries in electronics and the UK in financial services. Several global banks, many of which are U.S. based, found London the ideal place to trade in European securities because of the tight connection between the U.K. and continental Europe. This will most likely change. Frankfurt may become the next “London.”

Third, over the last 10 years or so, the U.K. has witnessed a large inflow of highly skilled workers— including medical doctors, engineers and professionals working in the financial industry—who have contributed to U.K. growth with their high productivity. It is unclear whether such inflow will continue or whether those professionals will remain in London with the downsizing of the financial sector and the likely stricter regulations on working visas.

Fourth, Britain is (actually, at this point, “was”) the economic bridge between the U.S. (but also Australia, Canada, India, etc) and continental Europe. Several U.S. companies have plants in Britain to take advantage of the free trade with the E.U. These are direct jobs for U.K. workers, and also create sizable spillovers to the rest of the British economy. With the U.K. out of Europe, the key reason to keep those plants will vanish. U.S. companies might be better off relocating to Germany.

Fifth, the U.K. comes out as a strongly divided kingdom, both geographically and demographically. Scotland and Northern Ireland voted to stay, as the city of London did, while the rest of the U.K. preferred to leave. The younger population (below 45 years of age) massively voted to stay (they probably foresee Europe as their future), while seniors (above 65 years of age) voted to leave (probably nostalgic about the U.K. they experienced in the ‘60s and ‘70s). Londoners have realized how important the E.U. market is for the “high” standards of living. Scotland probably trusts more European institutions than Downing Street. Northern Ireland relies strongly on Ireland, both culturally and economically. Therefore, we can’t rule out upcoming reference in Scotland and Northern Ireland to leave the United Kingdom.

How will the Brexit impact the E.U. and world economy?

The E.U. will suffer more from this than the world economy. Britain is a natural bridge between the E.U. and all other English-speaking countries, and continental Europe. Britain is the most free market economy in Europe, kind of a small-scale version of the United States. Its products markets are fairly competitive, and its labor market remains much more flexible than what seen in Italy, France, Spain and even Germany. I fear that with Britain out of the E.U. such “competitive pro-market” environments will weaken in continental Europe.

Besides this, Britain has been an important trading partner for most European countries. With likely higher trade costs (which will add to the fact that Britain was already outside the Euro area, hence trading with them already involved currency exchange fees and an exchange rate risk), that aspect will probably weaken, with negative spillovers on GDP growth across Europe. According to current estimates, we might be talking about -0.2 to -0.4 percent for single countries. This would be not be a big deal in countries growing at 3-4 percent rates per year, but this is clearly not the case in most E.U. countries (especially Southern Europe).

A more indirect, but also more sizable effect, is the uncertainty factor. Financial markets are soft ground for speculators, who bet not just on future stock prices but also on the future of countries. Since the U.K. is the first country to leave the E.U., we do not know what will come next: how long and complex the exit procedure will be, what kind of trade deal the U.K. will be able to strike with the EU—and most importantly—we do not know about cascade effects. I am already hearing in the news that other anti-E.U. parties, across Europe, will push for similar referenda. As Britain has just taught us, the outcome of those is highly uncertain.

Will the U.S. strongly feel the impact of the Brexit?

It will only if the Brexit prolongs the slow post-crisis recovery in the E.U. Britain will remain an important economic partner to the U.S., although, some companies, may not find the same advantages to stay in the U.K. As for the global economy, what I fear mostly, is the uncertainty effect. Over the last year or so, stock market returns have been very volatile, even in the U.S., despite the fact that the latter have shown signals of future growth.

Anything else of importance you would like to add?

This is not a good outcome for Europe. There was enough uncertainty already undermining the E.U. economy. However, this could also be a good opportunity for a “wake-up call” for E.U. institutions. For years economists have been advocating that there can’t be a monetary union without a fiscal union. The recent Greek crisis has made that even clearer. The current redistribution mechanism of E.U. resources doesn’t work.

Britain is kind of a special player in this, since it was already not part of the Euro currency, but part of the E.U. The British vote—what is crucial is not the fact that the “Leave” won 52-to-48 percent, but the fact that the “Remain” didn’t win by very large majority —tells us that we may not have a real political union. European leaders rushed to create a European institution without thinking about creating the concept of a “European citizen.” If similar referenda were called throughout continental Europe we will never see large wins, by either faction. To the British “Mr. Smith,” the E.U. is a black box that sucks up his money. I am sure “Signor Rossi” (from Italy) or “Moissier Bernard” (from France) share the same thought. The only one who may disagree is “Herr Muller” (from Germany).

Media interested in interviewing Airaudo about the United Kingdom’s exit from the European Union, should contact Niki Gianakaris, executive director of Media Relations, at 215-895-6741 or ngianakaris@drexel.edu.