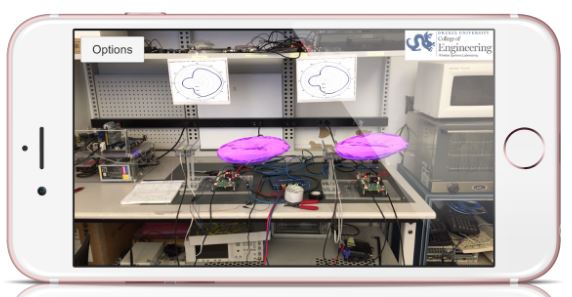 Dead zones, black holes, shadows…we all have our names for those bad-reception areas that are a nuisance in a world of ubiquitous, mobile communication, but it’s hard to see exactly why they exist and how to avoid them. A group of electrical engineers at Drexel is trying to give us a better look at how antennas work — so we can understand why they drop a connection from time to time.

Researchers in the Drexel Wireless Systems Lab (DWSL) have been working for years on a number of solutions including antennas that can self-adjust their beams to send radio waves at just the right direction to find your wireless device. But it’s difficult to truly appreciate the fruits of their labors because the magic is in the manipulation of electromagnetic radiation that lies outside of the visible spectrum.

That’s why the lab came up with a nifty app, called BeamViewer, that uses augmented reality and a bit of animation to show off their handy work.

DWSL’s antennas use an algorithm that constantly learns and adjusts the shape and direction of the radio transmission to ensure a steady connection. In this demonstration, the BeamViewer app links, via cloud networking, with the nodes that control the antennas, and using the phone’s camera view, uses augmented reality to overlay the scene with colorful antenna beam graphics that shows the current direction of the electromagnetic signal.

The beams shift their shape and direction as the environment changes between the transmitter and receiver, including blocking from people and obstructions as well as interference from other wireless devices and electronic appliances — illustrating how fickle signals can be and how active the antennas must remain to stay ahead of the game.

“This visualization is a way to show all the things that can affect signal patterns, things like physical obstructions, other signals in the same bandwidth, jamming devices, and other electromagnetic radiation, just to name a few,” said Kapil Dandekar, PhD, director of DWSL and a professor in the College of Engineering. “I always tell my students, if you could see all the non-ideal effects that your wireless signals experience, you’d be amazed that our devices ever get reception.”

The team recently presented BeamViewer at one of the top IEEE networking conferences (INFOCOM 2016), and allowed the entire audience to download the app to see a set of their smart antennas in action

“Before this app, the only way to ‘visualize’ what the antennas were doing in real- time was to look at indirect link throughput and quality measures,” Dandekar said. “With BeamViewer we can show the difference between a standard antenna — which has a signal pattern that looks like a static, floating doughnut — and smart reconfigurable antennas, whose signals are always adjusting to find a better direction.”

The group plans to make an iOS and Android version of BeamViewer publicly available as a teaching and research tool.