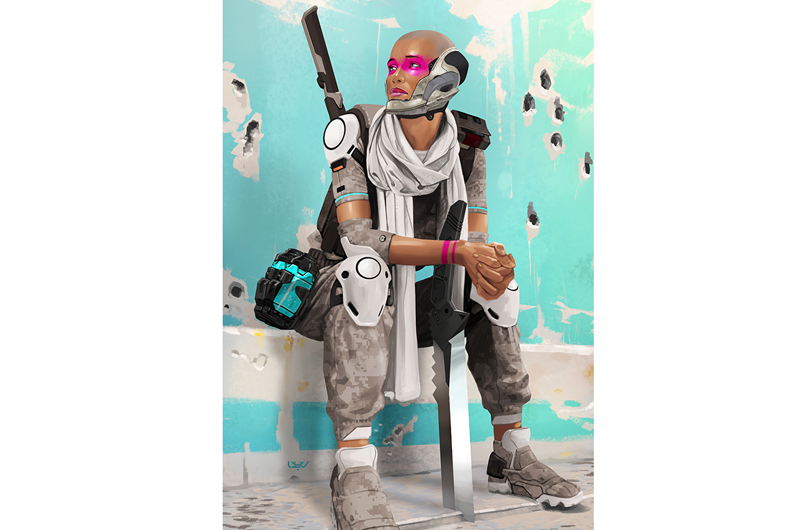 Speculative fiction is a term used to describe works that imagine universes that are unlike our own. The term covers science fiction, fantasy, even the cities of comic book heroes.

But far too often, this speculative fiction doesn’t dare to dream a world that isn’t white-washed. Far too often, those producing this fiction are similarly not diverse.

André Carrington, PhD, assistant professor of English in Drexel’s College of Arts and Sciences, not only studies speculative fiction but also is a fan of it. However, its treatment (or plain absence) of characters and the authors behind them who are not heterosexual, white men has not gone unnoticed by him.

In his recently published book, “Speculative Blackness: The Future of Race in Science Fiction,” Carrington explores the conventions and content of speculative fiction and what it means when it comes to race.

With an explosion in popularity of speculative fiction in recent years and the rise of more diverse characters and content producers, Carrington shared his thoughts on the legacy of the genre and its future when it comes to diversity.

How important is it for there to be diversity in speculative fiction?

It’s as important to see diversity in all genres as it is for there to be a variety of genres in which to read and write. We should recognize the contributions from people of all backgrounds to the literary and cultural traditions that we turn to for education as well as entertainment.

Moreover, if we don’t prioritize considerations of equity and inclusion when it comes to who tells our stories and what we all imagine and dream about, then we become closed off to important ways of understanding ourselves and one another.

What is the biggest barrier to bringing different perspectives to science fiction?

Thinking about this question brings a couple stories to mind.

My first response is informed by an essay I’ve read and taught by Kiese Laymon, a contemporary black writer and professor at Vassar. When he was trying to publish his novel Long Division — which involves time travel and has protagonists who are black youth in rural Mississippi — publishers were dumbfounded. They’d never seen anything like it succeed in the past. To me, this indicates that narrow-mindedness and risk aversion are powerful influences on the publishing industry. Much like movie studios, many publishers don’t want to take a chance on a depiction of black life that doesn’t reinforce prevailing ways of thinking about race.

I think Laymon’s novel was unbothered by genre conventions, and this could have made it difficult for many readers to reconcile their respective expectations regarding stories about black youth, on the one hand, and stories that rely on speculative devices like portals to another space and time, on the other — it was a risk with an unknown reward, and the author had some trouble getting publishers to join him in taking on that risk.

My materialist answer starts off anecdotally, but it’s corroborated by hard facts.

Recently, I was on a panel with two black science fiction writers. One of them, who is a black woman, noted that you’re not eligible to belong to the Science Fiction & Fantasy Writers of America (a benevolent association for authors) unless the material you publish meets certain criteria. These criteria include publishing work with presses that pay at a certain rate and selling a certain number of books.

Now, the difficulty of getting work by black and female authors into print in the past has led entrepreneurs to establish small presses that make a conscious effort to publish authors whom the big presses won’t.

That is one way to bring new perspectives to science fiction, yet, because they have less capital, small presses can’t pay as much, can’t distribute as widely, and can’t print as many books. In the words of one author, this situation means that you can publish a critically acclaimed, profitable book with an independent publisher like Rosarium or the erstwhile Vintage Entity Press, but it won’t necessarily “count” when you apply for membership in the professional association or seek another opportunity.

So how do other authors mitigate those risks? SFWA membership has its privileges. Members are eligible to access some resources if they have a financial emergency, make use of a grievance process to adjudicate disputes with publishers, secure some protections for their intellectual property or estate when they die, and enjoy the advantage of the association’s acronym on their business cards or CVs when they go to negotiate a deal.

These are structural problems with disparate impacts on people of color. We need to understand these problems through a critique of structural racism and interlocking systems of oppression, which I explore in my book.

Ta-Nehisi Coates’ “Black Panther” was recently released and Marvel hero Luke Cage is getting a Netflix series this fall. Would you consider this a watershed moment?

It is an exciting moment, and I think it’s especially significant that superhero comics are providing a nonfiction writer known for incisive social commentary (Coates) with a new creative outlet. I hope this happens for more writers who tackle issues he’s written about in the near future.

It’s also exciting that the showrunner of the Luke Cage series, Cheo Hodari Coker, and, of course, the lead actor, Mike Colter, are black.

I think some milestones for depictions of black women in the superhero genre are on the horizon: Misty Knight will be played by Simone Missick in Luke Cage, the phenomenal Tessa Thompson (of Selma and Creed) will be in a Thor movie, and Megalyn Echikunwoke is playing a superhero named Vixen on the CW network, marking the first time this character has appeared in a live action production!

Unfortunately, there are some other icons that have fallen by the wayside. I miss the DC Comics title “Manhunter,” which had a female lead who was one of my favorite comic book characters from the recent past. And I was a big fan of Milestone Media’s incredible comics with fantasy and science fiction themes in urban, multiracial, LGBT-inclusive settings.

I believe it’s only a matter of time, however, before we see publishers and producers across platforms recognizing that compelling narratives come in all colors and genders. The works of Octavia Butler often capture the attention of people interested in diverse visions of fantastic narratives, but there’s also a great deal of untapped speculative fiction writing to draw on for adaptations in the work of living authors who are women of color, including award-winners like Hiromi Goto, Nnedi Okorafor, and Alaya Dawn Johnson.