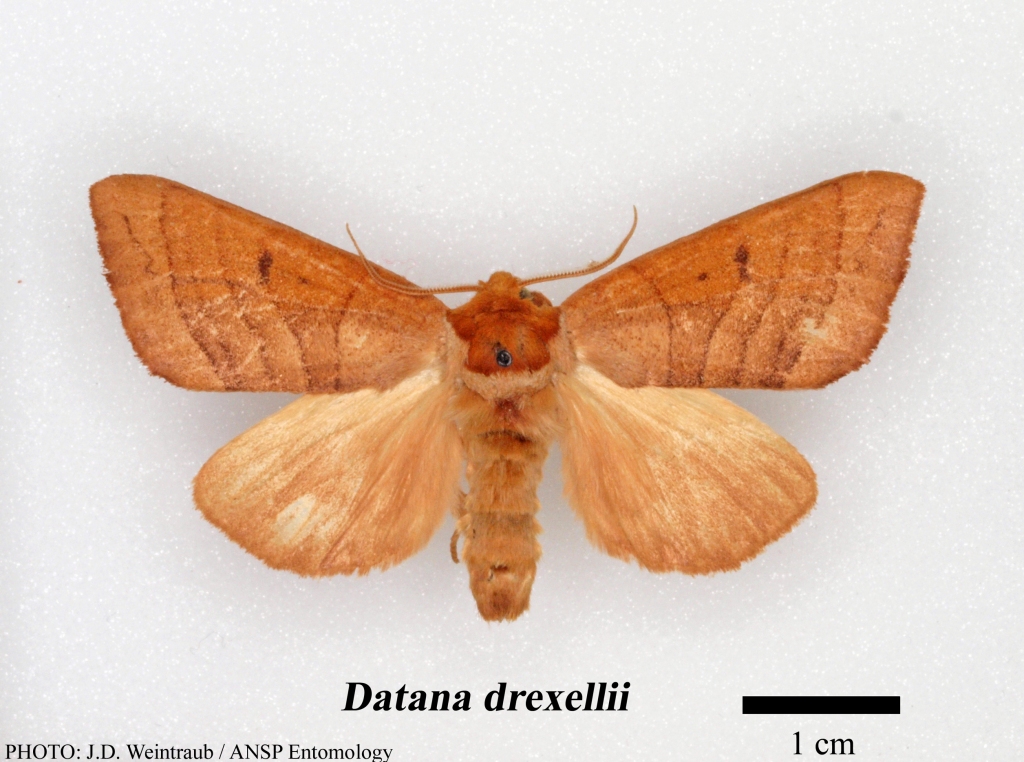 It was a surprise to Jon Gelhaus, curator of entomology at the Academy of Natural Sciences, when he came across the photo of a modest-looking moth in a book a few months ago. It was an ordinary-looking brown moth, not unlike a dried leaf. The surprise was its name, Datana drexelii.

Gelhaus has also been a professor of environmental science at Drexel University for nearly two years, since Drexel and the Academy formed an affiliation in 2011. But this moth showed that the institutions’ histories had been linked for much longer than that.

“I poked around and found out it was named for Joseph Drexel in the latter part of the 1800s for his support for entomological science,” Gelhaus wrote.

Joseph Drexel was the brother of Drexel University’s founder, Anthony J. Drexel. A well known banker and philanthropist like his brother, Joseph Drexel was also known in his life as an avid collector of books and music.

Gelhaus learned that Joseph Drexel had an entomological collection as well, which went to the American Museum of Natural History upon his death in New York in 1888. With help from archivists at Drexel and the Academy, Gelhaus found that both Anthony and Joseph Drexel were members of the Academy of Natural Sciences.

Drexel’s Datana moth was named in Joseph Drexel’s honor by the British-born actor and entomologist Henry Edwards in 1883. Presenting the formal scientific description of the moth and its species name before the Linnaean Society of New York, Edwards stated:”At the same time, I wish to append to this paper a description of the larval and imago [adult] stages of one of the new species of  which I have spoken, which I have called Datana drexelii, in honor of Mr. Joseph Drexel, of this city, who has done,  and is doing much to foster a love for the study of Entomology among us.”

View this document on Scribd

If you’d like to look for Drexel’s Datana moth in the wild, this week — National Moth Week, July 20-28 — is the perfect time to start. They are common in eastern North America.

But be warned, they may be hard to distinguish from other moths. Steve Mason, an Academy entomologist who specializes in butterflies and moths, told me that Drexel’s Datana and other Datana moths look similar as adults. All have brown wings with a pattern of light brown lines, and a fuzzy upper thorax that looks like a fuzzy head, according to bugguide.net.

To tell Drexel’s Datana from other Datana moths, Mason said, you must either dissect their genitalia (and know what you’re looking for), or observe the moth while it’s still a caterpillar with its distinctive, bright yellow pattern.

Check out the caterpillar photo above, or this one taken in Atlantic County, New Jersey. Both show the caterpillars striking a backwards-bending pose to dissuade visual predators from eating them, according to Jason Weintraub, collection manager of entomology at the Academy.

Look for Drexel’s Datana this week during National Moth Week, and come to the Academy of Natural Sciences for more fascinating bug facts and activities during Bug Fest, August 10-11.

UPDATE: Thanks to Academy entomologist Greg Cowper, who enlisted further help from the Academy Archives. Megan Gibes, the archives assistant, and Brandon Zimmerman, special collections researcher, turned up the original Academy membership cards from the Drexel brothers, below. The University’s founder was a lifetime member of the Academy.