The George Foster Peabody Awards have been considered a standard of electronic media excellence for the last 72 years. On May 20, writers, reporters, editors, producers, directors and all manner of media magnates will gather at the Waldorf Astoria to honor the best programming from 2012. Westphal College Dean Allen Sabinson, a member of the esteemed panel that selects the award winners, offered  up a rare look behind the selection process of the Peabody Awards.

“Best of the Best”

Establishing a standard of excellence, removed from popular and commercial appeal, is no easy task. It begins at The University of Georgia’s Grady College of Journalism and Mass Communication, where the award itself was established in 1941.

Students and faculty from the college, in teams of three, review more than 1,000 entries, rate by voting and summarize each before sending them off, in phases, to the members of the selection committee.

One of the unique qualities of the Peabody awards is that there is no set number of honorees or categories. It is the job of the selectors to –put simply – pick the best of the best. This year’s list of 39 winners is the most that the committee has given out since the award’s inception.

As new mediums have evolved, they have become eligible for entry and eventually earned the coveted honor. While the first Peabody Award ceremony was broadcast live nationwide on CBS Radio, it was not until 1948, seven years later, that the first Peabody Award would go to a television program:  “Howdy Doody” and “Actor’s Studio” both earned recognition. Now the Peabody Awards welcome entries created exclusively for websites and non-broadcast distribution, as well as television and radio programs.

To put the breadth of the awards in perspective, in 2011 Peabodys were given to the game show “ Jeopardy!,” a documentary on the 1994 genocide in Rwanda, “The Colbert Report,” the television series “Game of Thrones” and a biopic about the former prime minister of Pakistan. This year’s 39 honorees include a documentary about Tibetan yak herders, an Indianapolis TV station’s exposé of IRS fraud, HBO’s comedy-drama “Girls,” and SCOTUSblog.com, a website devoted to the U.S. Supreme Court. 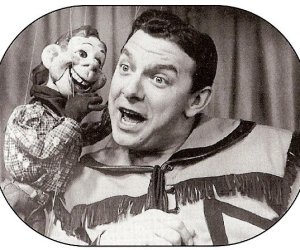 For Sabinson, the process begins in mid-January when the first of many FedEx boxes arrives on his doorstep.

“Usually the documentaries show up first in mid-January,” Sabinson said. “It’s a box full of DVDs with about 60-80 hours of television on them and the reviews from the Grady School faculty students and others from University of Georgia on each one.”

Each box represents approximately one-third of all the nominees of a certain genre…and about 45 hours of viewing for Sabinson.

award-winners during his time in the business, has a keen eye for picking out viable candidates for the top honor.  Sabinson sifts through the nominees for about five hours straight, from 7 p.m. to midnight three nights a week over the course of three weeks, watching about 10-15 minutes of each submission.

Many of the entries that work in conventional forms tend to blend together so I’m always looking for the oddball program,” Sabinson said. “So when I watch them, I hate to admit it, but it is such a heavy workload of viewing that I have to fight the instinct to be impatient and not want to like shows.”

Between January and March, the 16-member board convenes three times to discuss what they and the faculty-student committees have screened and deemed worthy of further consideration. The first meeting is in Los Angeles, where they focus primarily on documentary entries.  Two-to-three weeks later they meet in Washington, D.C., where they concentrate mainly on news submissions.  Then, in late March, the board members gather at the Peabody offices at the University of Georgia in Athens, Ga.  They spend five days discussing and dissecting the remaining entries – entertainment, radio, web – and deliberating the final winners’ list.

The real challenge, according to Sabinson, is that each winner must be unanimously chosen by the committee. In that marathon week of meetings that make jury duty look like a vacation, the committee puts in 12-to-15-hour days plus 4-5 hours of extra late-night viewing.

Once the group has gone through all the nominees, they vote on which ones they’d like to see more of, these selections must have at least 13 votes to move into the next round.  After viewing the selections, a second round of voting takes place, where there can be no more than two dissenters in the room.  At this point, with the surviving nominees dwindling, a final vote is held. The winners must receive unanimous support by the committee.

“The most controversial category tends to be entertainment,” Sabinson said. “It’s so subjective and the committee is a mix of people from academia and industry so we all have different ideas about what is award-worthy. This is especially true in comedy where my idea of funny may be very different than your idea of funny.”

In addition to HBO’s “Girls,” the entertainment winners this year include FX’s “Louis,” based on the comedic styling of Louis C.K. and BBC’s ageless science-fiction series “Dr. Who.”

And the Winners are…

Sabinson, who is finishing the fourth year of a six-year appointment on the Peabody Committee, considers it a challenge and an important part of his contribution to the field.

Being a Peabody award member can be very depressing because you’re watching reports on the worst events of the year,” Sabinson said. “Stories on poverty, death and disaster – this year we had everything from Hurricane Sandy to Sandy Hook- and it weighs on you. But it does allow me to get a good overview of the business in a very concentrated period of time. I’m very proud of this whole list, I think it does represent excellence in the field. It’s a great privilege to serve with the other Peabody board members who are an impressive and esteemed group.”