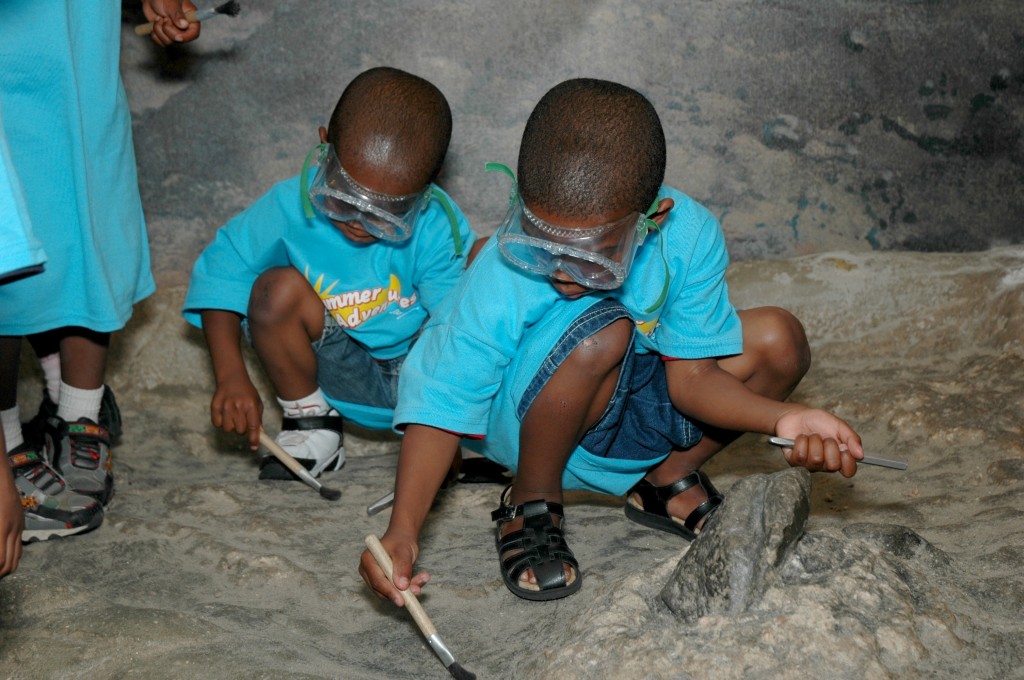 From the iconic T-Rex at the entrance to the active fossil prep lab tucked away in the back corner, Dinosaur Hall at the Academy of Natural Sciences of Drexel University is a delight for the senses of many fans of Earth’s mightiest extinct creatures.

Except when a sensory experience isn’t such a delight.

If you stop and imagine this and other popular museum spaces from the perspective of visitors on the autism spectrum, you’ll realize there’s a lot more potential that it could be simply overwhelming.

Last week, members of the Academy’s education and visitor services staff took on exactly that challenge.

These staff members spent Thursday morning in the first of a series of training exercises, learning about autism spectrum disorders from the experts at the A.J. Drexel Autism Institute, the first autism research center focused on a public-health science approach. Dr. Jennifer Plumb, a social worker who is the Institute’s outreach director, had just spoken to the group of about 30 staffers, about the heightened sensory sensitivities of many individuals on the autism spectrum.

Working in small groups, the Academy’s staff then considered several of the museum’s exhibit and interactive spaces in a new light. Dinosaur Hall is an exciting place to see ancient creatures – but at many times of day, when it’s crowded, it’s also very LOUD. The movement of large groups of children is a big part of that. An animatronic dinosaur that growls at visitors in response to a motion sensor could be startling. Up at the Big Dig interactive exhibit, where kids can chip away at a simulated fossil dig to find bones, the dress code – protective goggles – could be a tactile discomfort. And the lists went on – not just for Dinosaur Hall, but also for Outside In, the children’s interactive area, and the live Butterflies exhibit.

They also brainstormed where and how to locate “quiet rooms” – or at least less-chaotic spaces – where visitors having a rough time with sensory overload could be offered a calmer place to collect themselves with their families. Taking the idea a step further, one staffer suggested creating a code phrase for “quiet room” to use on their walkie-talkies, so any staff member needing assistance could page a helper to escort a family to a quiet space when needed.

Quiet rooms were just one of the intervention strategies recommended during the day’s training. As part of the training, Dr. James Connell, an educational psychologist who is the A.J. Drexel Autism Institute’s clinical director, reviewed evidence-based intervention and interaction strategies for working with kids on the autism spectrum. Other simple tips included using concrete, declarative language, or using a timer to help a child make a transition between activities instead of fixating on one.

Last week’s training activity led by the A.J. Drexel Autism Institute was the first of what will be a series of training events for the Academy’s staff.

And they are just one part of the story of the Academy’s efforts to become more autism-friendly, according to Dr. Jacqueline Genovesi, the Academy’s Vice President for Education. The museum is also leading a two-year, multi-institution grant-funded program that will provide not only staff development for employees at the Academy and other local museums, but also special family programs, educational materials, and museum mapping materials to help visitors on the autism spectrum and their families plan their visits and know what to expect.

These efforts reflect what may be a growing movement to make the world – and perhaps especially public leisure spaces – friendlier to the growing segment of the population being identified with autism spectrum disorders. The ballpark and the zoo are other noteworthy venues adopting autism-friendly practices.

Up Next: Fun and Games

The autism conversation continues at the Academy of Natural Sciences of Drexel University with a Philadelphia Science Festival event on Friday evening, April 19: Gaming as Therapy: A Pathway to Interaction. Dr. Craig Newschaffer, director of the A.J. Drexel Autism Institute and professor in Drexel’s School of Public Health, will be among the panelists.

Note to news media: For inquiries about the A.J. Drexel Autism Institute, contact Rachel Ewing (raewing@drexel.edu or 215-895-2614). For inquiries about museum exhibits or visitor experience at the Academy of Natural Sciences, contact Carolyn Belardo (belardo@ansp.org or 215-299-1043).