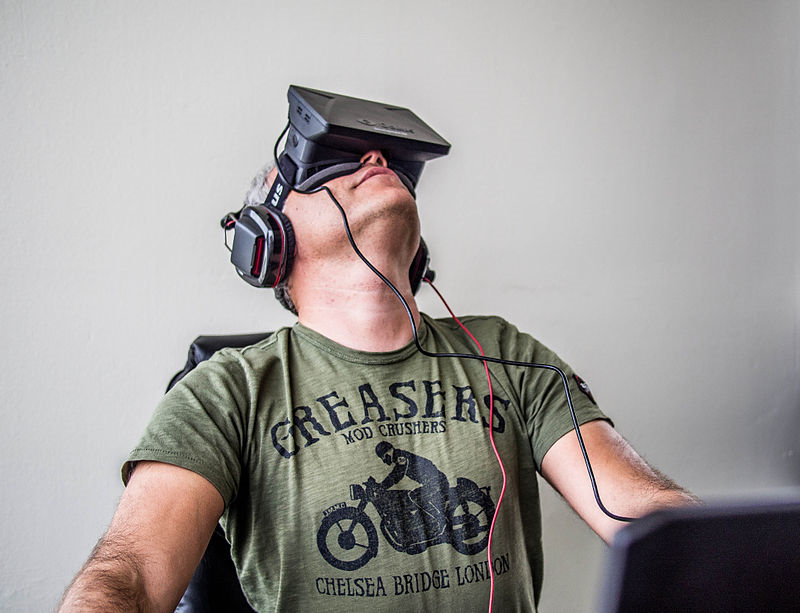 Could you imagine abandoning a movie plot line in the theater when it gets boring? Or deciding to follow a different character when the protagonist is annoying you? Choose-your-own-adventure-style movies might be the next box office innovation according to an adjunct professor in the Westphal College of Media Arts & Design, who is using the most sophisticated virtual reality technology to date to show what it looks like when the audience directs their own movie experience.

Chester Cunanan, used to spend nearly 40 hours a week “raiding” with his “guild” in popular online roleplaying game World of Warcraft. Splitting his life between work and Warcraft, Cunanan was a self-described “hardcore gamer” until recently when his pursuit of a graduate degree caused him to essentially abandon the World of playing Warcraft for a new quest: explaining the world of hardcore gaming to outsiders.

“I got pretty lucky when Westphal received its Oculus Rift development kit about the same time my idea for a thesis was coming together,” Cunanan said. “I knew I wanted to create a documentary on this unique gaming community, but having the opportunity to push virtual reality tech into a new space was also very appealing to me.”

Oculus Rift is the latest, and by many accounts most immersive, virtual reality technology in use today. The company that invented it, Oculus VR, arose from a $2.44 million kickstarter campaign and was recently purchased by Facebook for $2 billion. It seems poised to become the first commercially successful device of its kind, but right now the technology has only been made available to a few thousand test “developers” –Drexel among them.

“The Rift,” as those in-the-know refer to it, looks a bit like a bulky, opaque set of scuba goggles. This looking glass, however, submerges users into a digital reality in every direction they look, by using lenses that focus each eye on a different part of the device’s LED screen. It creates a 110-degree field of vision, which is enough to make the user feel like they are a part of whatever reality that’s created in the Rift.

Among these “realities” thus far are programs that can make you feel like a flying bird, a screaming roller coaster passenger or Seinfeld’s George Costanza. It can let you check out just about any street in the world, or in ancient Egypt for that matter. Some programs have been developed to help people use their new prosthetic limbs, recover from post-traumatic stress disorder, or even to practice performing surgery. And that’s on top of the myriad next-level video game applications.

Cunanan’s project is exploring how filmmakers and documentarians might use the technology to bring their audience into their stories. This is new territory for the Rift, as most cinematic programs for the Rift simply create a virtual setting for watching a movie, or put users into a virtual world based around one part of a movie. Cunanan’s work, wanted: Guild, is an animated documentary that lets viewers find their own way through the storyline.

He starts the journey of wanted’s audience in the living room of a devoted player of World of Warcraft. As the viewer navigates through the house, using a handheld Razer Hydra controller represented in the Rift by a floating hand, glowing orbs appear. Each orb contains a testimonial from a hardcore gamer delivered by a character from the game.

Cunanan defines ‘hardcore gamer’ as anyone who spends as much time playing World of Warcraft as they do at their job. He was able to track down many of his subjects through the game’s communications channels and the people he met during his time as a player.

“I sifted through a few dozen hours of interviews with people I knew or had encountered through World of Warcraft,” Cunanan said. “I wanted to show a broad spectrum of the people who play the game from the professional gamers to the more novice ones who are on the periphery of what you’d consider ‘hardcore.’”

These range from one subject who just got into the game to stay connected to his college buddies, to another whose game playing has been integrated into his family’s life at home.

“My wife is really supportive of my WoW time. We’ve been able to set up a schedule where I can raid a couple times a week while she watches the kids…it’s a good way for me to get some time in,” he said.

Exiting the house through sliding glass doors puts you into a backyard straight out of the World of Warcraft game itself –a nifty programming trick Cunanan was able to pull off by using models directly from the game–which allows this sort of use for non-commercial developers.

At this point, the testimonials portray a deeper involvement in the organization and strategy of gameplay and, as a result, the impact of the game on the daily lives of its players.

“Playing with my friends, being an officer, and supporting my friends in the guild means the world to me. It’s fulfilling to me in a way that I didn’t use to have.”

“Being able to escape to a place where I am over powered for a situation where in reality I’m faced with things I can’t control has been a great experience.”

“Once you hit 90 it was like here are 5000 daily quests you can do to augment your gear and access rewards. They weren’t mandatory but you want to make you’re doing your part. You don’t want to be the reason you’re holding your raid group back. They became mandatory.”

“On my way home I got all these texts from people. I signed on to find that the guild had all but disbanded and everyone had left within the space of twenty four hours while I was at work. It was a pretty soul crushing day.”

Although the tour is completely self-guided, Cunanan explained that he wanted viewers to feel a bit trapped in the game –a feeling shared by several interviewees and Cunanan himself.

“It got to the point where I would play for eight hours and then go to work, and get messages from my team leader about the game and strategies for our next raid,” Cunanan said. “It became way too much stress to deal with work and put in that level of dedication to the game.”

As he slowly extricated himself from the ties of World of Warcraft, Cunanan –who is now playing just a few hours per week- became focused on telling the story of the hardcore gamer and showing off the capabilities of the Rift.

“I stopped playing completely for a year while I worked on this,” Cunanan said. “In some ways I was still very much part of the World of Warcraft community, because I was talking with gamers to do the interviews. But I knew that with the time it would take to do a thorough job putting it together, I’d have to step away from playing.”

Stepping away from World of Warcraft actually proved easier for Cunanan than stepping into the world of Oculus Rift.

“I actually couldn’t use the Rift, I got nauseous within seconds,” Cunanan said. “It happens to some users and it’s something they’re fixing in newer versions –but it was a bit challenging to get some of the details right without actually putting on the goggles.”

It turns out that one of the bugs discovered by Rift users involved the optics of the device. The lenses are not adjustable to account for variations in interpupillary distance among users. And if the lenses do not align with the user’s pupils it’s a lot like having a poorly fitted pair of glasses. Results range from headaches to motion sickness. In Cunanan’s case, it was the latter.

Fortunately the design software and gaming engine Cunanan used to produce wanted: Guild was easy enough to use on a standard computer monitor and then convert to programming for viewing with Oculus Rift.

Admittedly, the resolution isn’t the best, but as the technology evolves, Cunanan expects that the software will allow for integration of high-quality graphics and video. Nor is the Razer Hydra virtual hand control, that Cunanan linked to the Rift, the most suited for this application, but developers are already working out better options for tying in tactile response systems.

“At this point I really just wanted to show that this concept could work,” Cunanan said. “The technology is going to evolve and become much more sophisticated, and people are going to come up with a million other applications for it, but to be one of the first to show that a VR documentary is possible –that’s a pretty amazing opportunity.”

Other Drexel professors are already eying up the Rift for use with their projects. The next application for it at Westphal College will come as part of the school’s digital heritage research that strives to digitally preserve historic places around the area for future generations.