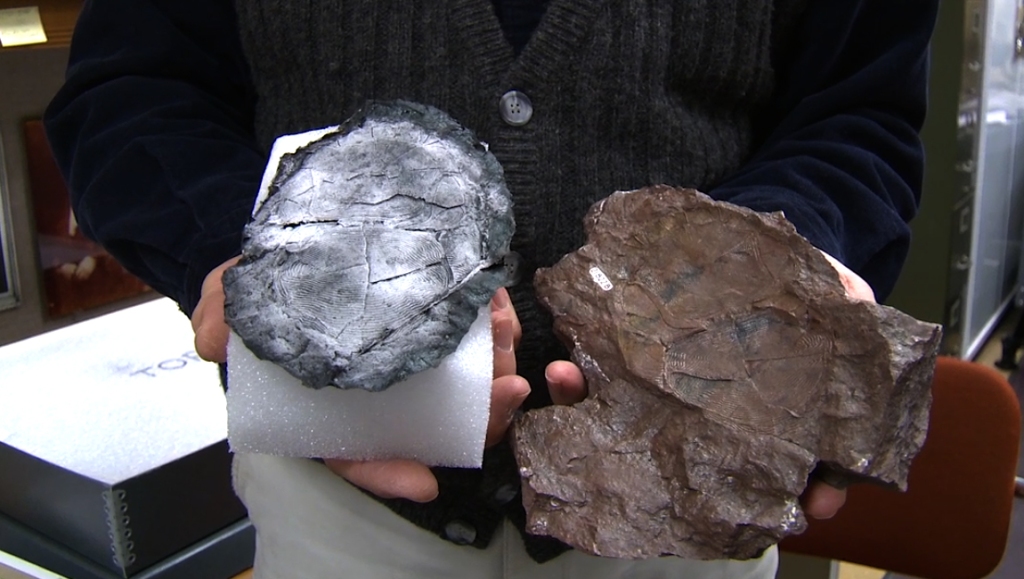 In 370 million-year-old red sandstone deposits in a highway roadcut, scientists have discovered a new species of armored fish in north central Pennsylvania.

Fossils of armored fishes like this one, a phyllolepid placoderm, are known for the distinctive ornamentation of ridges on their exterior plates. As with many such fossils, scientists often find the remains of these species as impressions in stone, not as three-dimensional versions of their skeletons. Therefore, in the process of studying and describing this fish’s anatomy, scientists took advantage of a technique that may look a lot like it was stolen from crime scene investigators.

In the video below, Dr. Ted Daeschler shows the fossil and a rubber cast made by pouring latex into its natural impression in the rock. Once the latex hardened, Daeschler peeled it out and dusted its surface with a fine powder to better show the edges of the bony plates and the shapes of fine ridges on the fish’s bony armor – a lot like dusting for fingerprints to show minute ridges left on a surface. With this clearer view, Daeschler and colleagues were better able to prepare a detailed scientific description of the new species.

This placoderm, named Phyllolepis thomsoni, is one of two new Devonian fish species described by Daeschler in the Bicentennial issue of the Proceedings of the Academy of Natural Sciences of Philadelphia, with different co-authors. The other new species is a lobe-finned fish discovered in northern Canada.

Both the Pennsylvania placoderm and the Canadian lobe-finned fish species are from the late Devonian period, at a time long before dinosaurs walked the Earth – but, geologically speaking, not long before the very first species began to walk on land. Daeschler studies Devonian species in particular to help describe the evolutionary setting that gave rise to the first vertebrate species with limbs. He has dug for Devonian species in Pennsylvania since 1993, and in northern Canada since 1999.

Daeschler, a vice president and associate curator at the Academy of Natural Sciences of Drexel University, and an associate professor in Drexel’s College of Arts and Sciences, and co-author Dr. John A. Long, a leading authority on placoderms from Flinders University in Australia, named the species in honor of Dr. Keith S. Thomson.

Thomson, the Executive Officer of the American Philosophical Society, has been a mentor and colleague to many Devonian fossil researchers, including Daeschler. Thomson has formerly held positions including President and CEO of the Academy of Natural Sciences, Director of the Oxford University Museum, and Dean of the Graduate School of Arts and Sciences at Yale University.

Asked for comment on the discovery named in his honor, Thomson noted his long professional connection with the Devonian fossil beds in Pennsylvania that Daeschler studies:

The Devonian beds around Renovo PA were worked extensively by my old professor at Harvard, Alfred Sherwood Romer and his associates, in the 1950s. They got some very good material of fishes but gave up on the site as a potential source of the very earliest four-legged vertebrates.  In 1965 Romer suggested that I have a go but there had been no major erosion on the sites and therefore nothing much new had become exposed.  I moved on to other things, but [in 1993] when Ted asked about possible projects in PA I gave him all the old notebooks, including mine, and off he went. In the intervening period there had been some major roadwork, new exposures were made, and on the Sunday evening of his very first weekend trip Ted came to the house and showed me a part of the shoulder of a tetrapod. Once we had looked at every which way and decided there was no other explanation, he causally reached into his bag and said “in that case, I have another one.”  The rest is history —  a history of very hard, careful, work, a whole team of collectors, some local, and brilliant discoveries of  superb material particularly of fishes of every kind. So I am delighted by the success of this work over the past twenty years and flattered to become associated with it by having a species named after me. (There is a certain symmetry to this as long ago I named one of the species that had been collected by Romer after my wife!)

Note to news media: Please contact me (Rachel Ewing, raewing@drexel.edu 215.895.2614) for contact info to interview Daeschler this week, while he is out of the office, or to request additional background info.